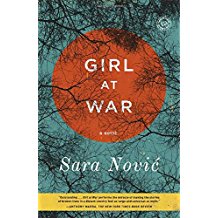 Recommended by Andy Lewis, this is a first novel by a young Croatian woman who lived through the nightmare of the Serbian War between 1991 and 1995.  Novic was a 10 year old living the normal life of school, family (a younger sister who was quite ill with kidney disease, and parent), friends, neighborhood, bikes, football etc when the Serbs and the para-military began to shell Zagreb.  Forced to find medical help for their young child in Sarajevo, the Novic family happened upon a para-military roadblock while returning to Zagreb.  In a particularly horrifying and upsetting sequence, Novic relates how her parents were executed and how she escaped by falling into the burial pit and pretending to be dead.  She then spent some weeks (?months) mutely with a group of Croatian resistance fighters, probably killing at least one JRA soldier before finally speaking again and indicating that Zagreb was her home.  After returning to Zagreb, she was smuggled out of the country to the US by her god-parents, Petar dying at the hands of Serb soldiers in the process.  Sara’s new family in New Jersey, her NYU schooling (which includes a particularly charming older professor who encourages her to read Siebald for its wisdom about memory’s fallibility and randomness as well as for the experience of the emigrant), boyfriend, etc are thrown into turmoil upon her return to Croatia at the age of 20 and reconnecting with Luka.  A moving and very disturbing and brilliantly told tale of man’s cruelty and tribal nature and the resilience of a young girl.