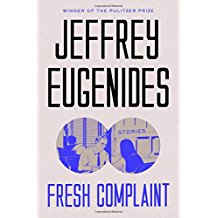 In these ten short stories, Eugenides manages to present the reader with realistic, breathing characters who are trapped in real-life situations that while seemingly extreme, are also quite possible.  The younger woman who springs her elderly friend with early dementia from the assisted living home and heads to snowed-in New Hampshire; the young college student in Indonesia who finds revealed truth as he is dying from dysentery, still meaning to write to his parents; the nerdy former boyfriend who tosses out the sperm sample of the ‘chosen’ donor and substitutes his own; the clavichordist whose instrument is about to be repossessed while his wife makes cloth mice for sale; the son whose loving father has just made another bone-headed deal in buying a FL timeshare to renovate; the green card marriage that ends with a restraining order; the sexologist in Indonesia who has to rethink his theories on gender; the foursome at an Irish estate, each lost in their own fantasies; the quiet bookish poet editor caught up in an embezzlement scheme in order to remodel his kitchen; the British cosmologist caught up in an Indian adolescents bizarre plan to escape an arranged marriage.  Weird, yes.  Brilliantly written, yes.  Does it make one resolve to be a good boy?  Yes!

The Unexpected President: The Life and Times of Chester A. Arthur, Scott Greenberger...

Astrophysics for People in a Hurry, Neil DeGrasse Tyson (#2232)
Scroll to top