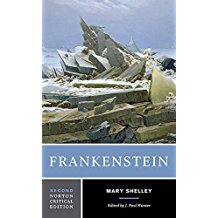 Read for my English 151 class at Harvard on the 200th anniversary of its publication, the classic monster story bears little resemblance to the 1931 Boris Karlof/Basil Rathbone movie of my youth.  This is actually a story in a story in a story, narrated by Victor Frankenstein who is found floating and dying in the Arctic by Robert Walton who is on a heroic quest to find the northern Eden of myth.  Frankenstein tells the story of having created life in Ingolstadt where he was a student of chemistry and natural philosophy, but how the creation went so terribly wrong leading to the deaths of a brother, wife, best friend, and eventually his father.  It’s a story of human nature, what make us human and how our cruelty to ‘the other’ can turn those beneficent instincts into the most horrible violent acts.  The book is a bit Romantic in its language and underlying myth, but it is a darn good yarn and kept me engaged until the final deaths of both Frankenstein and his creation.  Reading Edward Mendelsohn’s critique (see below), Jill LePore’s essay in The New Yorker, and Professor Scarry’s lectures has provided me with multiple levels of interpretation of this book:  the Locke/Rousseau view of human nature as a tabula rasa vs the Bible’s original sin; the myth of Narcissus character of Victor; the impact of infancy and childhood love and nurturing (Mary Shelley’s own mother died in childbirth and Mary lost multiple pregnancies and infants);  even the Edmund Burke view of the French Revolution as depicted in the monster; and finally the subtitle Modern Prometheus to serve as a warning to cloners and droners about the perils of new science.  Two centuries worth of rich interpretations!

My Twentieth Century Evening and Other Small Breakthroughs: The Nobel Lecture,...
Scroll to top