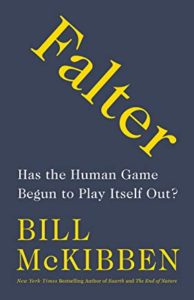 Falter: Has the Human Game Begun to Play Itself Out, Bill McKibben 2019

McKibben, the Schumann Distinguished Scholar at Middlebury College and a leading activist in addressing the global warming crisis, has written his 15th book about climate change, and it’s his most impassioned, powerful, and dire one yet.  The founder of 350.org, realizing that the best way to reach Americans is via a competitive sports metaphor, characterizes human existence as a ‘game’, albeit one that is  “unimaginably deep, complex, and beautiful.  It is also endangered. It is beginning to falter, even now.”  McKibben argues that after decades of progress resulting in longer life spans and better lives for billions of Earth’s citizens, the tide is turning, and we are perhaps heading for the fate of the dinosaurs, i.e. extinction.  He discusses the threats in three buckets—1) climate change and the unequal impact of its consequences worsening the global inequality that threatens our social structures, 2) artificial intelligence, and 3) genetic engineering.  In each case, the unintended negative impacts of  these potentially positive technologies (e.g. the industrial revolution resulting in the rise of carbon dioxide levels and global warming; the development of robotics and AI resulting in the dual threats of widespread unemployment and disengagement of humans from work and life itself; the tinkering with germ lines via CRISPR leading to extreme inequality with the rich designing better babies while the poor become a serf-like class) threatens the very nature of our humanity.  McKibben makes a strong case for a societal decision to take the ‘mature and scalable’ path of  consolidating our gains’ rather than pushing for ever more extreme progress.  His hope is ironically but realistically based on the positive impact of technology in the form of inexpensive, universally available solar power in combination with a social movement of non-violence and engagement of the many to overcome the greed, power, and Ayn Randian philosophy of the few.  His cautious hopefulness in the face of Trumpian climate change deniers, the power of money to influence our elections and democratic systems, and the inequality that threatens the very stability of our democracy is courageous.  I’m just not certain that it’s realistic.  This is a book worth reading, but unfortunately, it’s likely to be read only by those already convinced of the wisdom of his words while those who disagree or are ignorant will continue to read Atlas Shrugged or as in the case of Trump, nothing at all.