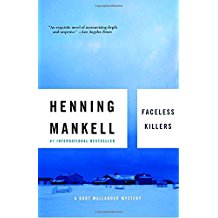 The first book in Mankell’s Kurt Wallander series, this is a tight, fast-paced, and intriguing mystery where the murders begin the book and as far along as five pages from the end, you have no idea who did it and it appears they will go unsolved.  Wallander is another intriguing character—-dedicated, hard-working, smart, and persistent, but not perfect.  His wife has left him, his daughter has tried to commit suicide and has left the home and is out of contact most of the time; he is overweight, drinks too much, and has pornographic dreams.  So we have an imperfect cop seeking truth and justice, in this case, after two elderly Swedish farmers are tortured and murdered.  He finally breaks the case, just as his friend and mentor is dying of cancer.  Lots of new strings to be tied up in subsequent books.  Fine series.