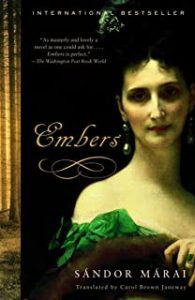 Two old men meet at an ancient castle in the deep forest of the mountains of Hungary, the family estate of the narrator of the novel, identified only as ‘the General’.   It is 1940 and the world has begun to descend into the chaos of another world war.  The men had become best friends and closer than brothers when they were military school students at the age of 9 and had remained inseparable in Vienna and in the countryside.  Konrad had introduced the General to Krisztina who became the General’s wife, eventually forming a perfect threesome, dining and spending time together when Konrad moved to the small village near the castle. Everything had seemed perfect until a fateful day in the waning 19th C.   By the next morning, Konrad had disappeared, and the General and his wife had never spoken or seen one another again.  Forty one years after that day, Konrad returns to the castle, and the General and he spend a long night eating, drinking, and talking by the fire as they struggle to understand friendship, family, fidelity, duty, and life.  If that sounds like a boring plot, think again as you will be mesmerized by the conversation and the revelations.  The Wall Street Journal identified Embers as one of the five best “Love Triangle” novels ever, and you will not be disappointed.  This is one of those books to read on a winter’s night, curled up on a couch by the wood stove with a glass of your best single malt scotch and get lost in another world.