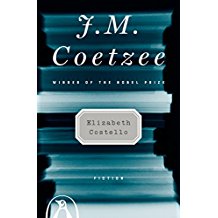 A strange and unsettling book ostensibly about a 60-something Australian novelist whose travels to speak at conferences in Pennsylvania (where she speaks about feminism and realism), on a cruise to Antarctica (where she confronts an old lover speaking about The Novel in Africa), a college in Massachusetts (?Wellesley) where she speaks about eating animals (and badly sets off a Holocaust controversy) , Zululand where her sister the nun is receiving an honorary degree, and Amsterdam where she speaks about the problem of evil.  The narrator is variously the narrator, the novelist’s  son, herself and some modernist techniques enable patches of time to be eliminated, but at the end of the day, I’m left unsure what this book is about.  My sense is that it is about the genuine identity of a person, writer or not, and how that identity is composed of beliefs and passions and how they are expressed vis -a-vis the external world.  Kafka is a big presence in many of these chapters, and perhaps Coetzee seeks to challenge us with Costello as Kafka challenged his readers with the Red Ape and Gregor the beetle.