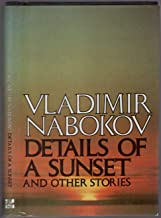 Details of a Sunset by Vladimir Nabokov 1976

Vladimir Nabokov was one of the greatest writers in the English language in the 20th C, and his failure to receive the Nobel Prize in Literature was perhaps the biggest oversight of the Nobel committee ever.  Born in 1899 (like Hemingway) in St. Petersburg, Russia, he emigrated to Berlin and then the U.S. where he taught at Wellesley and lived not far from us in Cambridge before ending his days in Montreux, Switzerland with his beloved wife, Vera.

His novels Lolita, Pnin, The Gift, The Defense, and most of all Pale Fire are among my favorite books, but he was also the master of the short story.  This collection of 13 stories date from his earliest writings and were originally written in Russian and published in small emigre publications between 1924 (like Hemingway’s first book) and 1935.

Unlike Heminway’s ‘In Our Time’, however, these stories are of uneven quality with only occasional flashes of the wit, brilliant descriptions and tangled reality of his later work.  One or two even felt like parodies of the ‘over-expressive’ style he shunned.  My favorite was ‘Christmas’ the story of a father returning to his country manor after the death of his young son, a lepidopterist.  Just as the father has decided to end his own life, overwhelmed by grief, an old, dried out chrysalis which his son had collected and which the father had recovered from the son’s bedroom, slowly comes to life and an Atticus moth emerges and “took a full breath under the impulse of tender, ravishing, almost human happiness.”

This is not Nabokov at his best, but even at his earliest you can see the flashes of brilliance that will come to characterize his work.  Thanks again to Richard for suggesting a return to books published 100 years ago.