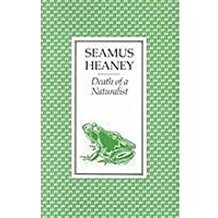 Death of a Naturalist, Seamus Heaney, 1966

Introduced to this volume by US Poet Laureate Traci Smith’s By the Book interview in March, 2018, I found Heaney’s first volume of poetry to be beautiful and readable.  Heaney, the 1995 Nobel Literature Prize winner, taught at Harvard for many years and died in 2013 at the age of 74.  A Catholic in Protestant Northern Ireland, he wrote extensively about The Troubles but this volume is elegiac, focused on his rural childhood in nature.  His portraits of his father, uncle, and local laborers are lovingly rendered.  His poems about the Aran Islands, I particularly liked:  The timeless waves, bright, sifting, broken glass,/Came dazzling around, into the rocks,/Came glinting, sifting from the Americas/To possess Aran. Or did Aran rush/to throw wide arms of rock around a tide/That yielded with an ebb, with a soft crash?/Did sea define the land or land the sea?/Each drew new meaning from the waves’ collision./Sea broke on land to full identity.