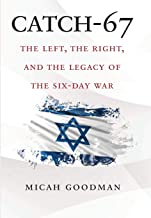 Goodman, an Israeli who has written and lectured widely on Zionism and the Bible, has written a frustrating and perplexing book addressing Israel’s ideological splits on the Right and the Left.  The former has embraced a messianic religious attitude towards the territories taken in the 1967 war seeing any ceding of land of Greater Israel as sinful while the Left has moved from peace to moral approbation about the occupation of those lands.  He adroitly points out that the identification with these ideologies prevents rational political discourse and practical solutions to these existential problems with the Right focused on security and the Left on moral conduct.  The seemingly endless discourse on these positions makes up the first part of the book and is depressing. The second part of the book focuses on moving from ideology and identity to pragmatism. Given the Palestinians narrative about the right of return and the Israelis narrative about a majority Jewish democratic state, there is no overall, one big step solution that will be possible.  The only solution appears to be partial.  Partial peace in exchange for partial reorganization of the West Bank to afford less occupation and more self-government.  He labels these two plans as the Partial Peace Plan and the Divergence Plan, but at the end of the day, this is a rather sobering and discouraging book.  The Israelis focus on fear and the Palestinians focus on humiliation do not bode well for a solution in our day.