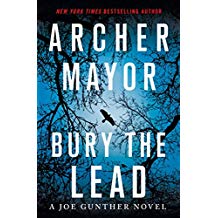 Mayor has written a Joe Gunther detective/mystery book every year since 1988 when this Yale graduate turned from writing history to the world of crime.  As a ‘death investigator’ for the Vermont Medical Examiner’s office, a detective for the Windham County Sheriff’s office, and a volunteer firefighter/EMT in his town of Newfane, Mayor’s books have earned a reputation for realistic detail, sharp character portrayal, and brilliant plots.  It’s, therefore, with some trepidation that I must pan Bury the Lead, as I did his prior book, Trace.  Both books have flashes of the excellence that characterized the early years of this series, but both of them suffer from what appears to be exhaustion as Mayor tries to pump interesting plots and new personal elements into the members of the elite VBI (Vermont Bureau of Investigation).  Joe Gunther who has risen from a Brattleboro police detective to the operations head of the VBI has a new romantic interest who is buying a home in Windsor (COI alert: our home of 31 years is in West Windsor, the adjoining town) and whose daughter gets embroiled in all of the crimes as a new photographer for the Brattleboro Reformer (COI alert: I write a biweekly book review column for the Reformer’s sister newspaper, the Bennington Banner).  Willy Kunkle whose left arm was rendered useless in a shooting many years ago is now experiencing severe nerve pain in that limb requiring surgery.  Lester Spinney’s wife Sue has taken a new job at a new health facility where Willy will have his surgery.  And if all of this is not enough to spark our interest, all of these actors are soon embroiled in at least three intersecting cases involving industrial sabotage and murder, the murder of a young, pregnant prostitute, and three cases of Ebola.  C’mon now.  We’re talking rural Vermont, not New York City or London!  The only far-out plot element that isn’t introduced is Vladimir Putin!  When I realized that I had read 277 pages of the 291 total and still had no idea who had committed the murders, sabotage, and Ebola assassination, I  knew I was in for a rapid tying together of the loose threads, but I was still amazed at the heavy-handed concluding scenes.  I think that Mayor has just run out of gas and needs to send Joe Gunther and the rest of the VBI on an extended vacation or perhaps retirement.  I may well pass on the inevitable 2019 book.