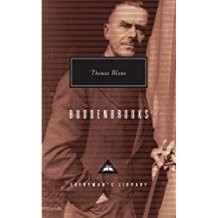 The third book in Philip Fisher’s Classic Novel course at Harvard,  this is a doorstop-sized novel at 734 pages, which I loved!  Tracing the rise and fall of the eponymous family from the purchase of a large, richly endowed mansion to the sale of the failed business and the move into rented rooms, Mann wrote this book in his early 20’s and was rewarded some years later with the Nobel Prize.  Themes of business and family, music and art, illness and health, success and failure are embroidered beautifully with the background of 19th C northern Germany, from the French Revolution and Napoleon to unification and Prussian militarism.  From Johann, to Johann, to Thomas to Johann with major roles for Tony, Christian, Gerda, and the families of the town, Mann develops a whole world and its development as the 20th C, WWI, and the rest of history appears on the horizon.  A long but satisfying read.