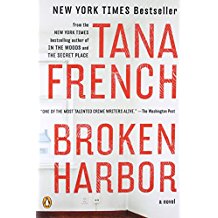 French’s first Dublin Murder book introduces the reader to Michael Kennedy and his rookie partner, Richie Cowan, two characters who appear in later works.  This gripping story begins with Kennedy and Cowan being assigned to a high profile, high stakes quadruple murder of a husband and wife and their two small children in the Irish coastal town of Briantown which many years earlier had been known as Broken Harbor, the site of Kennedy’s mother’s suicide when he was a teenager.  As you can already tell, this story twists and turns and gets under your skin as it moves steadily towards its climactic ending.  French can really tell a story and I look forward to reading another one of hers.

The Work of Art in the World: Civic Agency and Public Humanities, Doris Sommer...

Notes from the Field: Great Writers and Adventures on Life Outside, ed. Nora...
Scroll to top