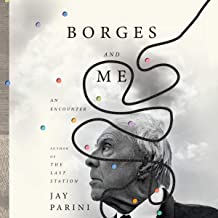 Borges and Me: An Encounter by Jay Parini 2020

I finished this book five minutes ago, just enough time to pull Borges’ ‘The Labyrinth’ off my shelf and Google Alastair Reid.  Ordinarily, I’ll sit with a finished book and my thoughts for some hours or even days before sitting down to write my review, but in this case, I’m so filled with emotion, thoughts, ideas, and confusion that I need to get something down on paper.

Recommended by a friend who responds nearly monthly to my email updates, I disliked this book for about 67% of its length.  It felt contrived—my least favorite memoir style of writing detailed conversations in quotation marks as if they’ve been transcribed when the conversations took place more than 50 years ago. But, lo and behold, I came to love the book, gradually understanding Parini’s goal of capturing time and memories with all their subjective and flawed specifics.

This ‘fictional novel’, memoir, Borgesian work tells the story of Parini’s time in St. Andrews, Scotland where he did graduate work in the 1971 in an attempt to evade the Viet Nam draft and find his calling.  There, he met Alastair Reid, the Scottish poet and translator of Borges, who took him under his wing and helped him find his nature and work.  During his time in St. Andrews, Jorge Luis Borges, a much heralded 70 year old blind Argentinian visited Reid who was then called away suddenly to London.  Parini was assigned to keep Borges company, and the latter expressed the wish to ‘see’ the Scottish Highlands and visit Inverness to surprise one Mr. Singleton with whom he had corresponded regarding Anglo Saxon riddles.  The several day journey by car all the way to the ferry ride to Orkney where Parini met George MacKay Brown, his thesis topic, is the main body of the book, and a riotous trip straight from Monty Python.

There are portions of the book that are beautifully written and there are portions that are irritatingly solipsistic, but overall, this is a beautiful portrait of a literary giant and a young man’s search for his place in the world of literature and the world at large.  The final pages of the book have a photograph of Borges with his arm around a young boy and a young man in the background.  Try as I might, I could find no reference to the source of the photo or who the others besides Borges are—-shades of Borges, Sebald, and others who use photos to build mystery.

On now to Borges’ Labyrinth which I’ve read before but which deserves re-reading.