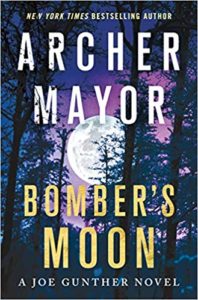 In the 30th book in the Joe Gunther series, Mayor a Vermonter through and through seems to have recovered his mojo.  It’s difficult to sustain mystery and excellence through writing a book with the same cast of characters in the same small state year after year, and it looked as if Mayor was losing it beginning a couple of books back. But this one is a winner.  It takes a few chapters to lay out the various and complicated plot lines, but once they’re out there, the book takes off and has enough surprises and clever touches for any mystery lover.  The usual cast of characters in the VBI (Vermont Bureau of Investigation for you novices), Gunther, Sammie, Willie, and Lester along with Joe’s girlfriend Barbara, who just happens to be the state Medical Examiner, her daughter, and her new buddy, Sally investigates two murders, a Me-Too smear, and funny business at the Thorndike Academy, a fictitious prep school in the real town of Vernon. The real towns of Bellows Falls and our neighboring Windsor also are prominent settings for this Vermont suspense-filled book.  I read most of this on a plane from Portland, OR to Boston and the five hours went by pretty quickly.  A good winter weekend read, especially if your snow-bound in Vermont since most of the story takes place in a real Vermont winter.