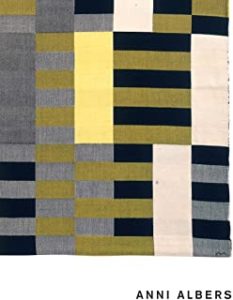 Anneline Elsa Frieda Fleischman was born into a wealthy Jewish-German family in Berlin in 1899 and died in Orange, CT in 1994.  During that time she lived the history of the 20th C, fleeing Nazi Germany to establish herself as an American artist.  Studying and then teaching at the Bauhaus in the 1930’s, she took up weaving and textile arts  when women weren’t allowed to study sculpture.   She married Josef Albers (he of later Homage to A Square fame)  and when the Nazis disbanded the Bauhaus in 1933, she and Albers followed Klee, Kandinsky, Breuer, and Gropius to America.  She and Josef found faculty jobs at a new school being started near Asheville, NC, the Black Mountain College, where the educational philosophy was ‘learn by making’. There, in the company of many who would become the leading artists, poets, and composers of the second half of the 20th C, she developed her skills in weaving and textiles that would lead to her being the first textile artist given a solo exhibit at MOMA in 1949.  By that time, Black Mountain College was beginning to fall apart (it would close in 1953), and she and her husband moved to New Haven where he was offered a professorship at Yale.  Despite laboring in the shadow of her famous husband, she continued to develop textile craft into art with major shows at MIT in 1959 and the Renwick Gallery in DC in 1985.  She is widely credited with bringing crafts into the orbit of fine art and has recently been given much more notice with recent solo exhibits at the Tate, the Wellesley College Art Museum,  and the Jewish Museum. Later in her career, she moved from textiles to print-making, and we own a set of nine prints which she made in 1983, recapitulating the sites of her career with three prints from each of the Bauhaus, North Carolina, and Yale eras.  We had the excitement and joy of seeing these nine prints hanging at MOMA during a February visit this year.  I’d urge you to find her work in person, in this book,  or on line and surrender to the beauty of her patterns and vision.

Until the End of Time: Mind, Matter, and our Search for Meaning in an Evolving...