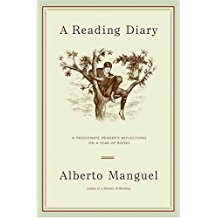 Manguel, an Argentine-born Jew who has lived around the world, wrote this book about his year’s reading primarily at his newly bought home in a small village in France where he lives with his partner C.  A prolific reader and writer, Manguel chose to re-read a favorite book each month and investigates his love for that book while commenting on events of the day, especially the U.S. invasion of Iraq post 9/11.  Borges and his Argentine childhood with the subsequent military dictatorship and the ‘disappeareds’ is another prominent theme.  As he said in the Forward: “Rereading a book a month, I might complete, in a year, something between a personal diary and a commonplace book:  a volume of notes, reflections, impressions of travel, sketches of friends, of events public and private, all elicited by my reading.”   He succeeds admirably with these 12 books:  The Invention of Morel by Adolfo Bioy Casares, The Island of Dr. Moreau by H.G. Wells, Kim by Rudyard Kipling, Memoirs from Beyond the Grave by Francois-Rene de Chateaubriand, The Sign of Four by Arthur Conan Doyle, Elective Affinities by Johann Wolfgang von Goethe, The Wind in the Willows, by Kenneth Grahame, Don Quixote by Miguel de Cervantes, The Tartar Steppe by Dino Buzzati, The Pillow Book by Sei Shonagon, Surfacing by Margaret Atwood, and The Posthumous Memoirs of Bras Cubas by Joaquim Maria Machado de Assis.  As he writes in the chapter on the Japanese book from the 10th C, ‘There is a certain magical arbitrariness to list making, as if sense were to be created by association alone and then he presents multiple lists:  lists of favorite detective novels, the books on his nightstand, mad scientists, his literary heroes (three of whom I had never heard of!), a list of a ‘sentimental library’ of books he wants for purely anecdotal reasons, books about ‘time suspended’, books about ‘places that cannot be left”, books about places that ‘cannot be reached’, favorite cities and the objects in his writing room.  Finally, he observes that now that he is in his mid-fifties and finally settled in Toronto and France after a life of moving around that “I’m suddenly flooded by the certainty of places I won’t live in, things I won’t do, roles I won’t play: a huge cosmic pageant that excludes me completely.  Unutterable relief.”  This is a fine collection of musings on reading that I thoroughly enjoyed.