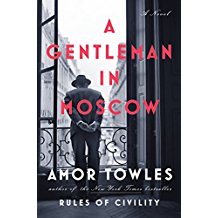 A Gentleman from Moscow, Amor Towles, 2016

Perhaps because this was the most recommended book in the last 12 months, I was underwhelmed until the final 1/3 when the plot quickened and the author tied up some loose ends in a most satisfying and clever way.  Count Alexander Ilyich Rostov returns to Moscow after the Bolshevik Revolution and because of his fame as a poet, he is not executed but is made a Former Person condemned to live out his life in the Hotel Metropol.  The story of his next 40 years there, the characters he meets, and his activities as a head waiter, teacher of a top Secret Police Commissar, lover to a famous actress, friend to an exiled literary idealist, and surrogate father to first Nika and then Nika’s daughter, Sophia is engaging.  A fine way to start the new year.