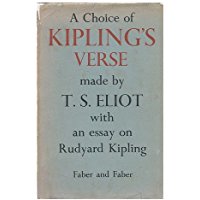 This is a fascinating little book suggested in a newsletter from the Radcliffe Institute and found through the Minuteman Library System at Framingham State University. The major value of the book is in Eliot’s introduction.  Running at some length, the former Milton/Harvard graduate makes a valiant attempt to rescue Kipling’s poetry from the derogatory labels that had affixed themselves to it by the mid-20th Century—imperialist, racist, war-mongering, misogynist (Gee, it sounds like our President!)  In a tightly written, erudite, and very readable 40 pages, Eliot makes the case that Kipling was that rare writer skilled in both poetry and prose.  He describes his poetry as verse rather than poetry, not because it is simple or ‘low’ but because Kipling was more interested in the subject than in the ‘music’ of poetry.  Eliot likens the poems to ballads.  He praises Kipling for acting rather than just being and says that ‘he knew something of the things which are underneath and of the things which are beyond the frontier,” conveying an historical imagination through the particular experiences of particular men.  Through his love of Empire, travel (including the US), and Sussex, Kipling’s verse finds a great supporter in Eliot.  The poems themselves are fun to read with their regular meter and rhyme.  Oldies like ‘Gunga Din’ and ‘If’ are scattered among lesser known paeans to forgotten British generals and most of all, the common British soldier whose bravery and willingness to die for Empire gave the island that is England sway over most of the world in the 18th-20th C.  An amazing tale told in beautiful verse by this son of Vermont. (