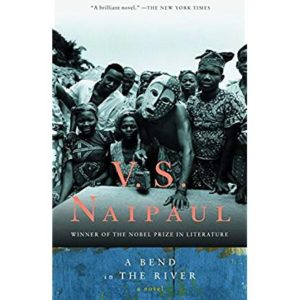 A Bend in the River is often cited as the best novel by V. S. Naipaul, the 2001 Nobel Prize winner in Literature who died earlier this month at the age of 86.   Naipaul was born in Trinidad, a member of an Indian community that had originally come to the island as indentured servants in the 1880’s.  His more than fifty books included fictional and non-fiction explorations of religion, history, and customs in the post-colonial Caribbean, India, and Africa as well as observations about England where he was educated at Oxford. The Nobel citation stated that he was honored ‘for having united perceptive narrative and incorruptible scrutiny in works that compel us to see the presence of suppressed histories.’  A Bend in the River is the story of Salim, an Indian whose family had lived and worked in East Africa for several generations, exposed to colonialism and the violence and anarchy that followed independence.  Salim returns to the town at the bend in the river where the family had been successful merchants and experiences the rise and fall of commerce and stability as the African country (?Congo, ? Uganda) goes through political chaos.  The unease of being neither native nor white conqueror, of being neither belonging nor ruling, and ultimately, the primary issue of not having a home pervades the book.  The most telling observation for me was Naipaul’s characterization of Salim as not wanting to ‘stand out’ and of his inability to define himself and his life within the day to day customs, norms, and ways of the Africans among whom he lives.  A vital and living book about being ‘the other’.

This is Water: Thoughts, Delivered on a Significant Occasion, about Living...
Scroll to top